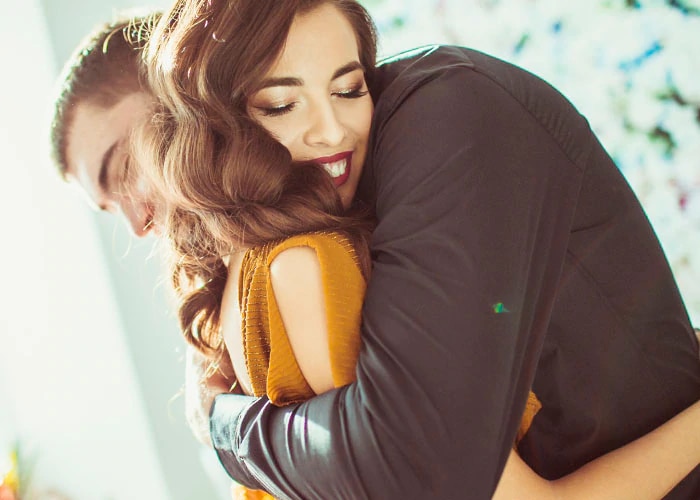 It’s in the way he looks at you

Signs a man is in love with you secretly don’t come more obvious than eye contact. There’s an old saying about the eyes being the window to someone’s soul. What can definitely be said without argument is that the eyes are always a dead giveaway, whether the person is feeling soulful or simply amorous. Do you notice him checking you out when you’re not actually in conversation? Does he blush when he’s speaking to you? These are all telltale signs that a guy likes you but is trying not to show it.

You could respond in any way

Here’s another secret sign he likes you. Do you often tell a funny story that doesn’t get the huge reaction you were expecting? If there’s one guy who will always react with a hearty laugh, an oasis of mirth and appreciation among the torn faces, then there may well be an ulterior motive. You might ask yourself ‘does he secretly love me?’ The answer could be affirmative. Because always reacting to you positively, hanging on your every word, are indications you really matter to him.

He only has eyes for you

Signs someone is secretly in love with you don’t come more obvious than when you are the center of his attention, even if you’re just one in a crowd of attractive-looking female friends. It could be a social gathering, a works outing or an evening at a popular night club, if he’s getting attention from eligible girls only to rebuff each one and somehow always end up by your side, what bigger hint do you require? Some guys will simply let their infatuation simmer from afar, casting longing looks in your direction. Others will be less discreet and find it very difficult not to flirt with you at every opportunity. However they do it, you need to decide the extent to which his feelings are reciprocated. At least he isn’t being pushy!

He’s your knight in shining armor

When a man tells you he loves you, it isn’t necessarily genuine. People can drop the L-bomb for a variety of reasons, often closely related to how affectionate they are feeling after having knocked back several shots during the course of the evening. But you can quickly determine when a guy means it by his general attitude. Does he always stand up for you, no matter the circumstances? Whenever you find yourself facing a traumatic situation, is he always prepared to back you up? Perhaps you found out someone was having a bitch about you in his earshot, so he immediately jumped into that argument and stood his ground on your behalf. Relish the fact you are the center of his world right now!