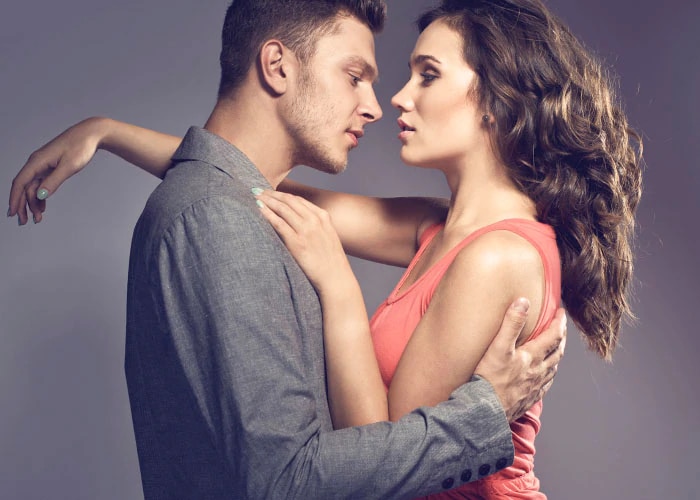 How to build sexual tension with a man? There’s a golden word to keep firmly lodged at the back of your manipulative mind: a simple one-syllable word that is so potent. Tease. This is how you create sexual tension, by flirting shamelessly with him, mentally undressing him by the way you hold his stare, cracking outrageous innuendos, and getting tactile with him now and again. If you’re in a club, dancing provocatively before him will hook his attention. But the crucial aspect of how to tease your man is knowing when to leave him hanging. Dance sensually, but when the music stops, head off to the bar or powder room. Ensure he is regularly kept in a state of feverish anticipation.

Being risqué will get your everywhere

There are so many ways to bring him to the boil. There are sexy things to say to your crush. There are conversation topics to get him flustered and flushed. But being risqué is by far one of your best ploys. Think of those femme fatales from classic black and white films, who could reduce their leading males to whimpering wrecks simply by casually revealing their stocking tops, or bending over at the opportune moment to reveal a generous cleavage. Guys simply cannot get enough of a woman who is overtly provocative.

Building sexual chemistry is something many women can achieve as effortlessly as turning on a switch. Dressing to impress is a tried and tested method of cranking up sexual electricity. Women have been excelling at this for decades. Fashions may change, but the attitude remains constant. Clued-up females appreciate how to create sexual chemistry with a man: it can be something as simple as unbuttoning just one more button of her blouse in order to draw any suitor’s attention to her natural assets.

Keep him on his toes

Women often ask ‘how do you know if you have sexual tension with someone?’ The answer is very rarely anything other than ‘you just do.’ For all that modern life can be complicated, nature remains pleasingly straightforward. Men can be very shallow creatures and it certainly doesn’t take much to get their testosterone levels spiraling out of control. A few years back adverts for a certain brand of push-up bra were displayed on massive billboard posters in prominent positions across many cities. Women regarded these images with a certain amount of admiration. Men tended to be forced into urgent maneuvers to avoid crashing their cars because their attention was so distracted. This may be a flippant example, but it displays an undeniable truth. Where guys are concerned, sexual tension is invariably simmering just below the surface, waiting to be untapped by any female in the know.