Home
Dating Blog
Flirting Advice
How Can You Tell If a Coworker is Flirting with You? 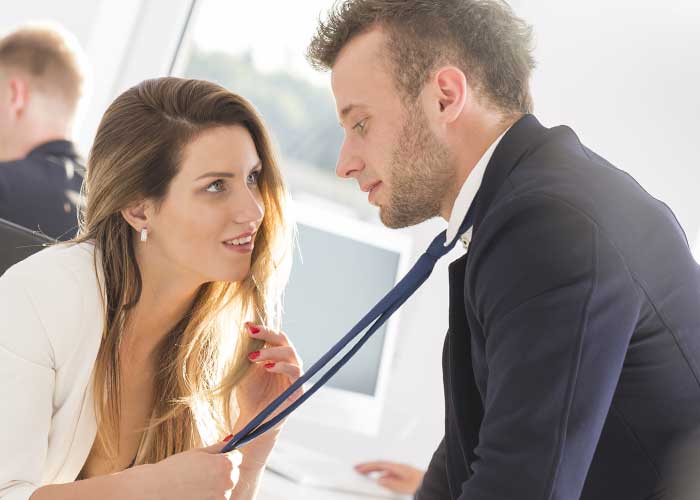 How to tell if a married woman likes you at work

We spend almost one-third of our adult lives at work, so ‘how to tell if a married woman is flirting with you’ is bound to be a question which crops up. Surely if you suspect married coworker flirting is going on, it’s nothing to be unduly concerned about? If anything it’s flattering, isn’t it? Well, obviously it boosts the ego when someone shows interest, especially if you also find them attractive. But you need to tread carefully.

Some of the more obvious signs

So which office flirting signs should you be aware of? Signs a married female coworker likes you will include a lot of eye contact. There may even be a lot of tactile action going on. Other workplace flirting signs include laughing at all your jokes, no matter how average! How to tell if a coworker is flirting with you? The tell-tale symptom is when the banter between you frequently descends into naughty innuendos.

Flirting with co-workers who are married is obviously a problem area. For the instigator, because they’re not likely to appreciate much about your home life, they won’t be considering your partner. Or their own, for that matter. When you ponder the dilemma, ‘I think my married coworker likes me,’ it’s more likely to be a serious issue for you. If they’ve reached the stage when they’re openly flirting at work when married, they’re probably not fazed by the possible consequences.

Dealing with the situation

Signs a coworker is flirting rather than just being friendy might include always looking for excuses to be alone with you. News of an impending office away day to a hotel somewhere will increase the innuendos. Male coworker flirting signs are often more up-front. The answer to the query, ‘perhaps this married coworker likes me,’ could be they’ll think nothing of asking you out for a drink. Or to book a room at the hotel after the day’s teambuilding exercises have finished.

Be aware of the potential fallout

Signs a married woman is attracted may become especially tricky if she’s in a more senior position, with the power to influence your position at work. If you rebuff her advances, could that impact on your promotion prospects? If you’re a female, pay close attention to obvious signs he’s flirting at work. A crucial point to be aware of is this: not everyone who indulges in flirty behavior has any intention of taking it further. Signs of flirting at work, such as banter, are usually nothing more than a laugh; a way to relieve the stresses of a long day in the office. When it does cross the line, it can lead to marriage breakups.